They say that tattoos are addictive.  I used to think this was impossible simply because of the pain involved...I mean you are literally getting stabbed thousands of times in the same area...how can that be addictive?

I can say that in some strange perverse way, they are indeed addictive.  After I got my first tattoo it didn't take me long before I was thinking about getting another one.

This time I thought "why not get a couples tattoo with my wife?"  For the record, her name is Michelle and my parents started calling us M&M early on in our relationship.  We even had custom M&M's made for our wedding so I thought we should do something with the M&M characters from the commercials.  I suggested it to Michelle and she said it was a good idea.

I started looking around for an artist who specialized in cartoon type work.  I didn't want to go with my last artist as his specialty was Celtic art, not cartoon.  A friend at work pointed me in the direction of his friend who worked out of Crimson Empire.  His name is Chris Labrenz and I checked out his gallery and liked what I saw.

We went in for a consultation and he seemed excited about what we wanted, and we liked what he had to say.  We booked our appointment for July 19.  It was about a week before our appointment before we got the first example and with a few changes we had our tattoo designed.  The premise was the green character for Michelle with a nurse hat (as she is an RN) and the red character for me with a motorcycle helmet.  I am an IT guy but couldn't think of anything work related that I wanted so the helmet would work!

Ink day came and we arrived at 2pm for what promised to be a LONG day.  Michelle went first as she was a bit nervous and wanted to get it over with.  At just over 3 hours she was done and what a trooper!  Here is her finished tattoo just before the bandage went on. 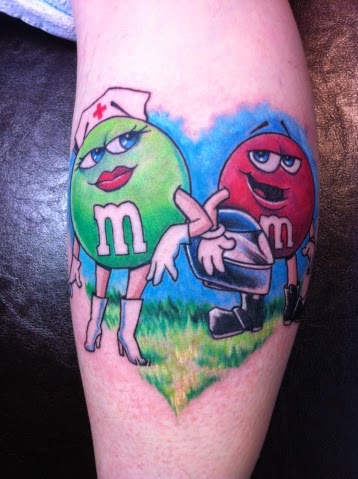 Next up - me!  Michelle was such a trooper that I had to ensure I was a better canvas.  I joked that I was probably going to fall asleep.  The funny part...during the line-work, I probably could have fallen asleep...barely felt the outline at all.  Now the colour and shading was a different story.  However, I managed to not cry like a baby and Chris remarked that we were his best clients as far as not moving while he worked.    Here is my finished tattoo just before the bandage went on. 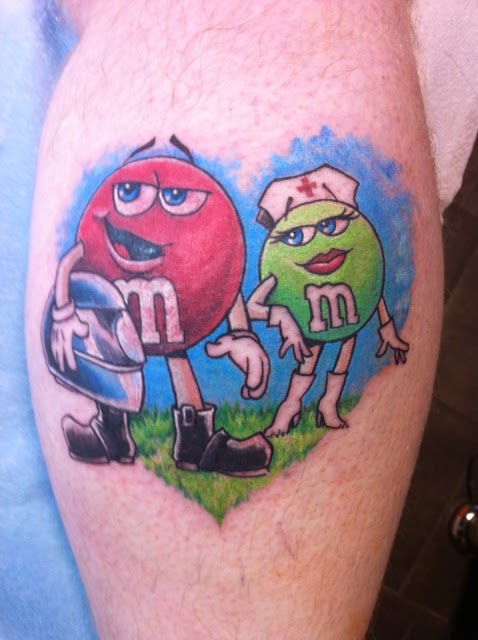 Up next?  I mentioned to my kids that I would like to get tattoos with them, kinda like a bonding experience that will last a lifetime.  Not sure what we will be getting, but I'm sure something will come to me!
Posted by Unknown at 2:41 PM No comments:

First Trip on the new bike

OK...so I have had the new bike for almost 4 months now and just finished my first long trip.  We did 3200km in the mountains.  The hard part was the first day when we did just over 900km in one day.

What a fun bike to ride in the mountains!!!  The seat does need a bit of work and a friend had his seat fixed by a lady in Calgary so I will probably take it to her to fix.  After a few hours it becomes very uncomfortable...almost as if there is a bit of a hump in the middle and the foam all compresses after time which means you are sitting on that hump.

Our first day was a long one...we rode Edmonton to Toad Rock in one day, which had a TON of rain.  Not my idea of a good day but we were kinda committed to it.  There was a 2 hour stretch from Radium to Creston where we didn't have any rain, but the rest of the day was very wet.

From Creston we head north to the Kootenay Lake Ferry.  This is Hwy 3a and is rated one of Canada's best motorcycle roads.  As I have ridden this road multiple times I can agree that it is hella fun, but not on this day.  As we headed north it was starting to get dark and we could see a storm coming.  I have uploaded a video of the ride so you can see how it went from really nice to really ugly.  The total time of the ride was just over an hour but I have sped it up to be only 8 minutes.  Check it out!


About an hour after we got to Toad Rock the rain stopped so we were able to get our tents setup.  The rest of the week was super nice, with temperatures hovering around 30c.

One one of the rides, I actually got hit by (or I hit) a bird!  I have had plenty of close calls with birds in the past, but this was the first time I actually hit one.  Here is the video!

During a number of our rides I saw a sign for the Kokanee Glacier with what looked like a gravel road.  Now, they market my bike as an Adventure Touring bike which means that I should be able to handle gravel and even some dirt roads with little problem.  As a result we decided to check it out.  It was quite rough but the scenery was spectacular and it was a LOT of fun.  We only made it about 6km up the Forestry Road when Pat's bike was running hot so we decided to turn back.  Nothing worse than having bike troubles in an area with no cell service.  I took video of the ride back down the mountain to show what it was like.  As the camera was on my helmet it does not really show how rough the road was, but still awesome!


I will totally do that again as it was a lot of fun.

The only bad thing that happened to me was a flat tire.  I woke up on Canada Day to the flat and as nothing was open it meant a day of no riding.  The tire would hold air for a while but had a slow leak.
The next day I filled it up and rode it (slowly) into Nelson to get it fixed...or so I thought.  They told me they won't repair tires and I would have to buy a new one.  $360 later I had a new tire.  All that work on my chicken strips was gone and I would have to start over!  LOL

My bike now has over 7700km on it and I still really like it.  It could use a bigger windscreen and a center stand...some work on the seat...maybe heated grips and handguards for the cold days.  Other than that I am quite happy with it.  Did I mention it is a LOT of fun in the twistys?  I look forward to my next big trip...hopefully in August if the finances allow...