So I put the Shadow away for the winter on October 31 and the snows came November 1 so I timed it just right.  It was going to be another long winter...I could tell.

January brings the annual Motorcycle Show which I have gone to for the last number of years.  This year was a little different as I was actually in the market for a new (or used) bike.  I had done some research and was hoping to like the new 2014 Suzuki V-Strom 1000 as it had taken a year off for a redesign.

Unlike last year the Kawasaki booth was the first one inside the main doors, while last year it was Harley Davidson.  My friends and I were going to sit on as many bikes as we could and one of the first ones I sat on was a 2014 Versys 1000.  I really liked the way it felt but had no hope of affording the $14000 price tag.  Here is where the skies opened for me!  The salesman mentions that he has 4 of the 2013 models in the Burnt Orange color left and that they are going for $9000.  The first thing I said was "My wife would kill me if I came home with a new bike!"

We carried on checking the other booths out and my friends kept bugging me about it...after all, I was in the market.  Michelle texted me to see what was happening and I mentioned the deal and she shocked me by saying "Go for it!".  When I asked for clarification she said "You have been looking for a new bike, if it is a good deal and you can make it happen, go for it!"  Now I didn't know what to do...

I walked around the rest of the show in a daze wondering what I should do and trying to figure out if it was even possible.

By this time my friends were done and leaving so I wandered back to the Kawasaki booth.  Part of me hoped the 4 bikes would be gone so I wouldn't have to make a decision, but a big part of me hoped they would have one left.

I found the salesman and asked him if they had any left...he said "we have 2 left."  I said "you only have 1 left now!"  I filled out the loan application and signed the deal, all the time wondering what I had just done!

When I got home, Michelle asked me if I got the bike and when I told her I did she said "Good for you!"

Once the loan was approved I went in and signed all the paperwork and then scheduled my pickup day...With 60 people scheduled to pick up in March I needed to pick a day soon...I selected March 15 and hoped I would be able to ride it home, but made arrangements for a truck and trailer if the weather was bad.

As the day got closer I was like a kid counting down to Christmas!  I'm sure I annoyed my friends and co-workers...

The day was finally here and the weather was on my side!  6c and no snow on the roads!  I picked her up and got some riding in and it was glorious!  Of course I was nervous as hell...it was my first ride of the season, on a style of bike I have only ridden once, on a bike I have never ridden...but everything went well.  I even recorded my inaugural ride and have posted it to YouTube...if anyone cares.  LOL

So far, I have only put 150km or so on the bike but am really liking it...I can't wait for the warm weather to get here and stick around for a while!

Here is the bike with my top-box installed. 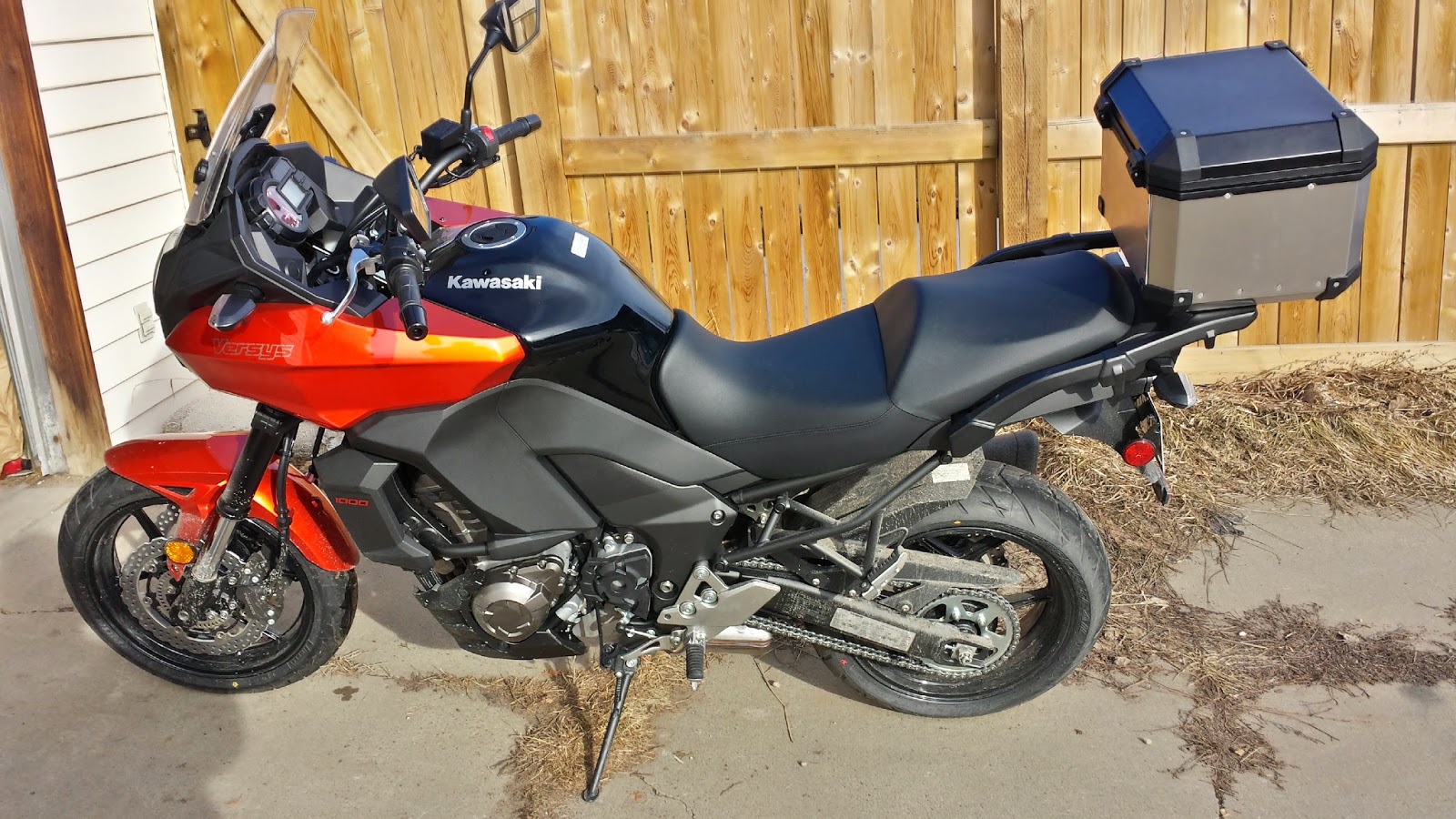 Posted by Unknown at 1:25 PM No comments: